Immigration Bill amendment on the use of segregation in detention

Medical Justice is grateful to Stuart McDonald MP for tabling the segregation amendment which was debated in Committee on 18th June 2020.

This amendment prohibits the use of segregation in detention except in crisis situations, and then only up to 24 hrs 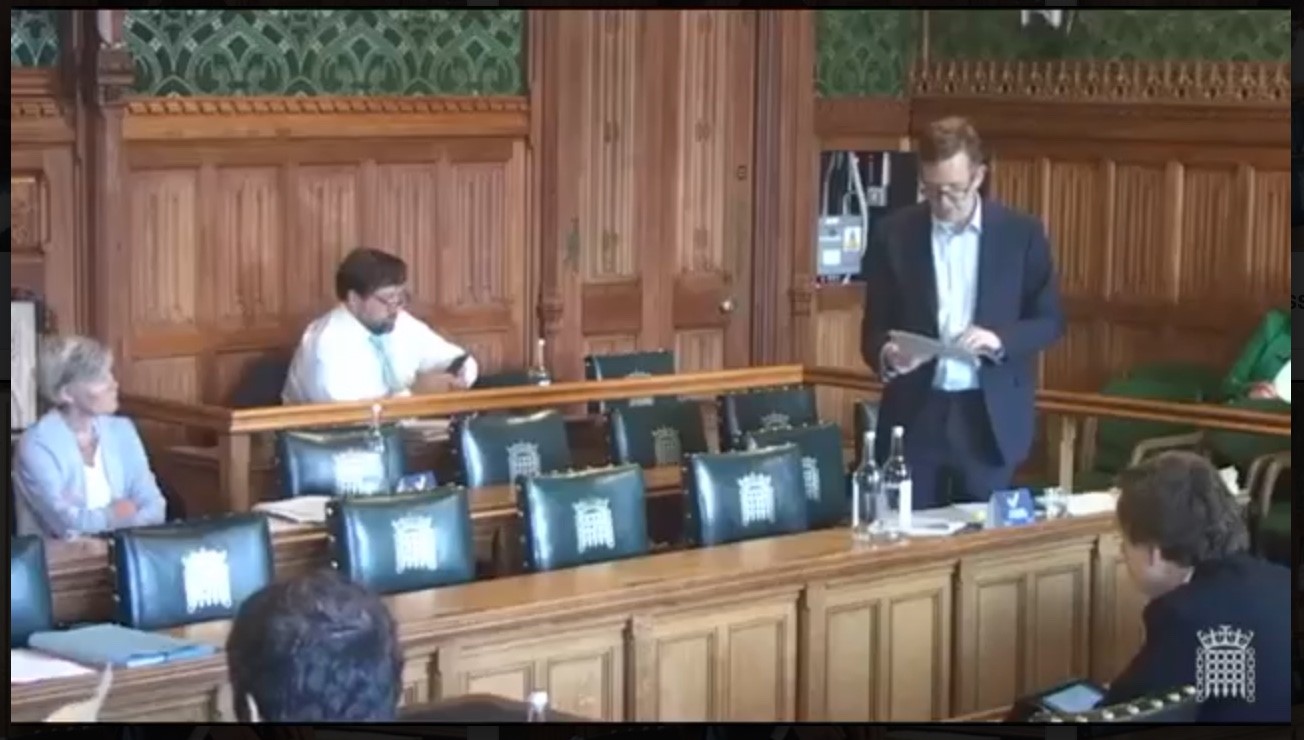 The amendment was only debated and not voted on at this stage. It may be re-tabled in the Lords later

Make sure you are on the Medical Justice mailing list to find out about the next steps.

The use of segregation can be life threatening

Detainees inappropriately segregated for months and years, with one detainee being segregated more or less continuously for 22 months. Another detainee was transferred to a psychiatric hospital following 80 days in segregation and another was segregated more than 8 times during her 800 days in detention.

These issues are ongoing. The 2019 IMB Annual Report on the Heathrow Airport IRCs state that one detainee “started to exhibit bizarre behaviour on the residential units and was moved to the CSU (Care and Separation Unit). It was established that he had a Mental Health condition and after assessment he was admitted to Hillingdon Hospital having remained in the CSU for 16 days.

Prince Fosu died 6 days after being detained and then segregated at Harmondsworth Immigration Removal Centre (IRC). He suffered undiagnosed, untreated psychosis and related bizarre behaviour, dehydration, malnourishment and hypothermia. He died alone, on the concrete floor of a ‘strip cell’ in segregation with no mattress, having had little if any food, fluid or sleep.  He was naked, emaciated, and covered in debris.

I beg to move, That the clause be read a Second time.

I had originally anticipated that this would be part of a much wider debate on immigration detention, but it looks like we will be having that on Report instead of in Committee. I am grateful to Medical Justice for flagging up the continued use of segregation in immigration removal centres, which we believe risks causing severe and permanent damage to detainees. In the past decade, at least two deaths in IRCs have been directly linked to the use of segregation. Segregation has played a role in four High Court cases in which a detainee’s detention or conditions of detention were found to amount to inhuman and degrading treatment in breach of article 3 of the European convention on human rights. Countless more detainees have suffered the negative impacts of segregation on their mental and physical health.

What we are really talking about is the practice of keeping a detainee separate from the rest of the IRC population. It is usually done by placing the detainee in a special unit at the centre, either alone or with other detainees being held under similar conditions. Segregated detainees can be locked in their cells for up to 23 hours a day, with severe restrictions placed on their activities and interactions with others.

In short, segregation is one of the most severe and draconian measures used in any detainment setting. Detainees can be held for an initial period of 24 hours, but that can be extended to seven days and 14 days with the authorisation of the Secretary of State. It can then be subsequently renewed, if required.

The effects of segregation on physical and mental health can be devastating. It has been found to lead to increased rates of anxiety, social withdrawal, hallucinations and suicidal thoughts. Even after relatively short periods of time, the damage done to a person’s health can be long-lasting and in some cases permanent.

Research has shown that segregation can have a negative effect on the health of anyone who experiences it, and the risk for those with pre-existing mental health conditions or other vulnerabilities is particularly high. People who have been held in similar conditions in the past as part of torture, for example, may find the experience extremely re-traumatising.

The stated justification for the use of segregation in IRCs is the interests of safety and security or for refractory or violent detainees. However, a report from Medical Justice in 2015 showed that segregation is being used as ​a form of punishment and to house individuals with mental health issues that cannot be adequately managed in detention, including to manage detainees at risk of self-harm.

Inspection reports from independent monitoring boards and Her Majesty’s inspectorate of prisons continue to raise concerns about the use of segregation in IRCs. Examples of such practices include detainees inappropriately segregated for months and years, with one detainee being segregated more or less continuously for 22 months. Another detainee was only transferred to psychiatric hospital following 80 days in segregation, and yet another was segregated more than eight times during her 800 days in detention. The issues are ongoing. Segregation is not helping people, but is, on the contrary, making things much worse.

The key point is the availability of segregation, which perpetuates the inappropriate detention of those who often end up subject to it. It allows for problem individuals or vulnerable individuals who cannot be managed in detention to nevertheless still be detained. Despite their detention being inappropriate, the Home Office knows that there is always a possibility of placing them in segregation, should their condition deteriorate or their behaviour grow increasingly difficult to manage. Once these vulnerable detainees end up being segregated, they are housed in an environment that is totally unsuited to their needs. They are placed in forced isolation, removing them from the support of their peers, as well as limiting their visibility and access to organisations that could provide help.

If the use of segregation was not an option, proper attention would need to be paid to whether it was appropriate for the individual to be in detention at all, whether they can be managed safely in an IRC or whether an alternative approach should be sought with more appropriate support in the community. That is why the safeguards and protections in place under rule 40 and rule 42 can never be adequate. We need to abolish the practice altogether.

The new clause would still allow and make provision for crisis intervention where there is an imminent risk of harm to the individual or other individuals in the IRC, but that should be the purpose of those interventions, and that should be it. Too often, that intervention is being used and abused by the Home Office. People who belong either in police custody if they have breached the criminal law, or in a mental health institution should not be detained in IRCs in inappropriate conditions for days on end. I hope the Minister will address those points and seriously look at the issue I have flagged up, because the situation cannot be allowed to continue.

I thank the hon. Member for the opportunity to debate this topic. As he will be aware, in recent years the numbers in detention overall, excluding the current period, have been declining, but a process obviously still needs to be in place to manage the detentions, the detention centres and the detention estate, as we still have it.

The arrangements for removing immigration individuals from association with their fellow detainees are set out in rule 40 of the detention centre rules 2001. The day-to-day operation of rule 40 is, in turn, governed ​and supported by the published Home Office detention services order—DSO—of February 2017, which Home Office and contractor staff working in immigration removal centres are obliged to follow. Any decision to remove a detainee from associating with other detainees should not be taken lightly.

A decision to separate an individual from their fellow detainees and place them in rule 40 accommodation must be taken on a case-by-case basis, for the minimum amount of time necessary and only as a last resort when other options have been tried, but failed, as an effective response to the safety and security risk presented by the individual detainee. The DSO makes it clear that other options should be considered before a detainee is relocated under rule 40, based on their individual circumstances. Other options might include transfer to another residential unit within the centre, transfer to a different centre or closer supervision in the normal location. The focus throughout is on positive engagement with the detainee who has been removed from association to ensure they are able to return to the normal regime as soon as possible.

The welfare of immigration detainees is extremely important. To ensure this, immigration removal centres need to operate in as safe and secure a fashion as possible. Rule 40 is intended as a measure to support that objective. The amendment would, however, require individuals who benefit from it to be returned to association with others after an absolute maximum of 24 hours, regardless of any continuing risk the individual concerned may still pose to his or her fellow detainees.

If an EEA citizen poses a risk to the safe and orderly running of an immigration removal centre, it cannot be right that options for managing this risk should be constrained, as compared with the options for managing risks posed by a detainee who does not benefit from the provisions of the new clause. To do so could endanger the safety and security of detainees in a centre generally including, paradoxically, other EEA citizens. I accept that the wording is probably to get the new clause in scope to be able to have the debate about the rule more widely.

Given the reasons I have set out and given the need to ensure safety and security within detention centres, I hope the hon. Gentleman will accept the reasoning put forward for why the Government cannot accept this new clause.

I am grateful to the Minister for his explanation of what should happen, but I suspect that the theory of the rules does not match the practice. The view of Medical Justice is that what the Minister has just described does not reflect what is actually happening in detention centres. I am sure this is something that we will revisit, but in the meantime I beg to ask leave to withdraw the motion.